You are here: Home > Public News > Volunteers, Reservists and Cadets from Cheshire honoured by Her Majesty’s Lord-Lieutenant for exceptional service
◄Back to News

Volunteers, Reservists and Cadets from Cheshire honoured by Her Majesty’s Lord-Lieutenant for exceptional service 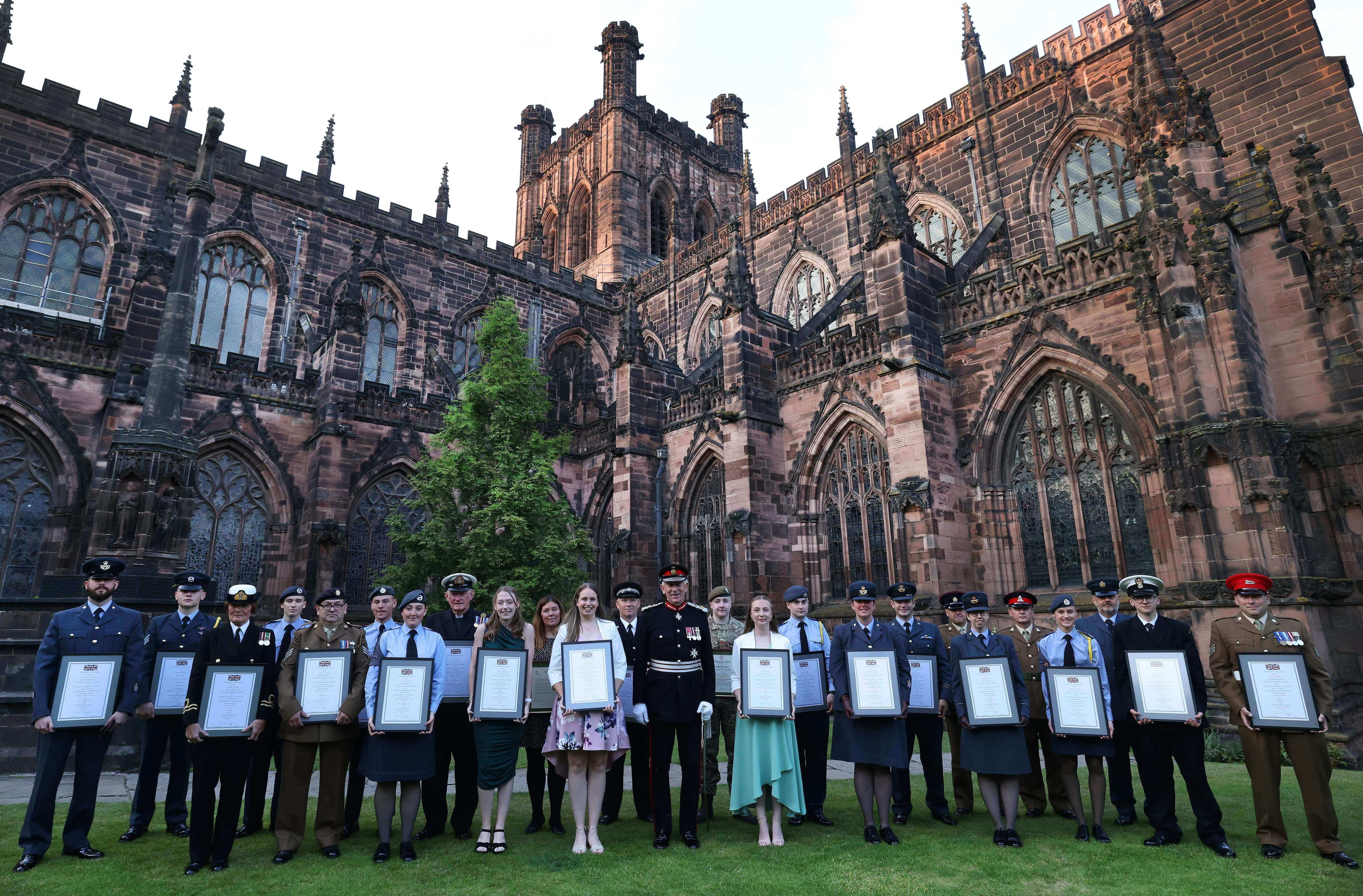 Twenty three adult volunteers, reservists, cadets and veterans were presented with Her Majesty’s Lord-Lieutenant’s Awards during a ceremony held at Chester Cathedral on 3 August 2021.

The awards are recognised as laudatory honours throughout the Ministry of Defence. The evening also saw the appointment of Her Majesty’s Lord-Lieutenant’s Cadet, one of the highest honours a cadet can achieve.

The presentations were made by Mr David Briggs MBE K.St.J., Her Majesty’s Lord-Lieutenant for Cheshire. During the ceremony Mr Briggs told awards recipients: “I truly thank all of you for your exceptional service to others.”

The annual awards are organised in each County in the region by the Reserve Forces’ and Cadets’ Association for the North West of England and the Isle of Man (NW RFCA). NW RFCA Chief Executive, Colonel Mark Underhill OBE DL, said: “As the organisation which supports and promotes the Reserve Forces and Cadets in the region, these awards ceremonies really are the highlight of our year.

“The Cadet organisations, both in communities and in schools, offer young people unparalleled opportunities, experiences, skills and qualifications. The achievements of the cadets who have received awards this evening truly are outstanding, and they are highly deserving of the recognition of Her Majesty’s Lord-Lieutenant.

“None of these opportunities would be possible however without the dedication and commitment of the Cadet Force Adult Volunteers who give freely of their time and skills for the benefit of young people. Tonight gives us an opportunity to celebrate their exceptional volunteer service, and to thank them.”

In addition to the Lord-Lieutenant’s awards, Essar Oil (UK) Limited were presented with their Ministry of Defence, Employer Recognition Scheme Gold Award (revalidation). Representing the highest badge of honour, Employer Recognition Scheme Gold Awards are awarded to those that employ and support those who serve, veterans and their families. Essar Oil achieved their Gold revalidation last year, however due to the pandemic they were unable to be presented at the time.