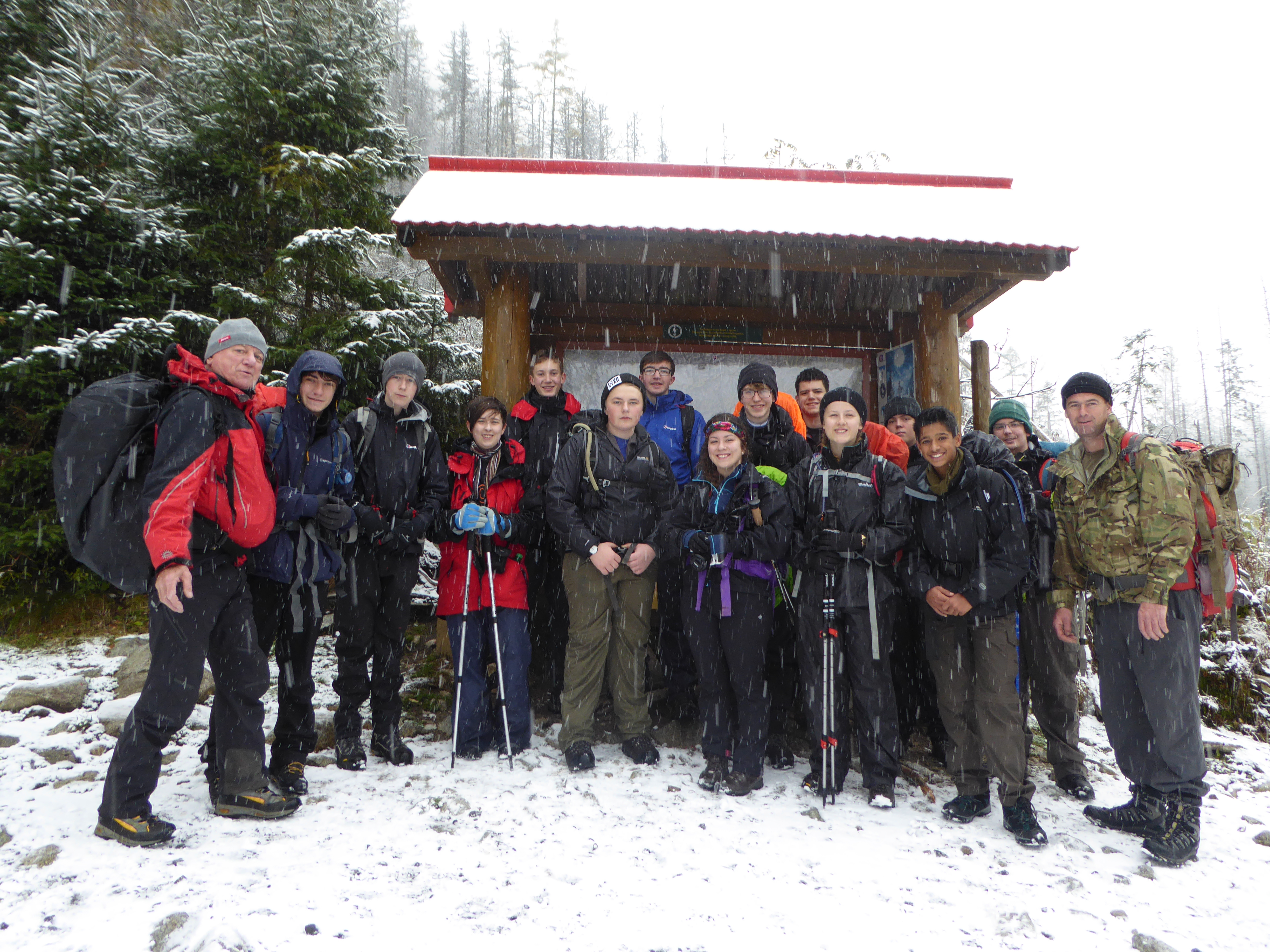 As a CCF Adventurous Training Officer and Winter Mountain Leader, I felt privileged to take a group of cadets from Oldham Hulme Grammar School CCF on expedition to the Carpathian Mountains of Slovakia and Poland. 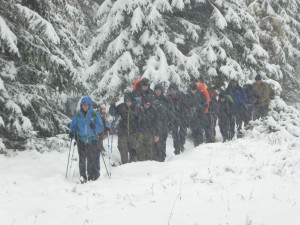 We Never expected this

Following arrival in Zakopane, we made our way by road to the village of Tratanska Kotlina in Slovakia for the start of the adventure. Leaving the village, we followed the Dolina do Sledmiu Zvodel, crossing many bridges as we gained altitude in the heat of the day, before heading along forest tracks with the white limestone cliffs of the Belianske Tatras as a backdrop, in our quest to reach Chata Plesnivec, our first night’s rest.

Waking for breakfast at the Chata Plesnivec, we found we had been transported from a warm pleasant mountain scene full of sunshine and stunning views to a winter wonderland, due to the very early arrival of the winter snows (it was the earliest snowfall for over 12 years – and we were unlucky, or lucky enough depending on your point of view) at the start of our second day in the mountains.

However, the ever present snow presented the group with no major difficulties, as we kept our plans under constant review, changing them as necessary to ensure the safety of the group in the continuously changing weather conditions.

From the Chata Plesnivec our trek would take us through Slovakia’s White Tatra for a further three days, continually gaining altitude as we passed through the refuges of Zeleno Pleso, Chata Zamkovskeho, and Popradskom Plese, via the Lakes – Pleso Staw, Skalnta Chata, Slaski Dom, and crossing the Rakuski Pass at 2030m, and the Ostrava Pass at 1978m.

Reaching the Popradskom Plese, the views were disappointing as the snow continued to fall. As we settled into for the night we discussed our options for the border crossing in the morning with our local guides and members of the local mountain rescue.

After good night’s sleep, we visited the ‘Symbolic Cemetery’ for victims of mountaineering accidents in the High Tatra’s or tragic circumstance in the greater ranges.   The visit had added poignancy for the group due to the fact that our local guide’s partner had been tragically killed on Nanga Parbat in 2012.    After paying our respects, we set off towards the Morske Oko hut on the Polish side of the mountains, and our climb to the summit of Mount Rysy.

Climbing steadily the weather worsened, and then deteriorated rapidly, until we reached an altitude of 2200m, when the temperature dropped suddenly and it started snowing heavily again. It was therefore time for another change, so we made our way to lower ground with our descent becoming more treacherous as we made our way off the mountain to the warmth of the Morskie Oko hut, which is one of the oldest huts in the high Tatra’s.

The following day we set off towards the 90 year old Morainic Hut nestling on a plateau set amongst fir and pine trees in the forest, picking our way down a steep snow-covered track towards our night’s refuge.   Suitably rested, we set off on the final leg of our journey, out of the mountains and forests along old tracks towards Zakopane.

Our journey through the High Tatra’s was both exciting and challenging, covering over 97km, and 4950m of ascent. The whole group were amazed at what they had achieved – and rightly so; it was an achievement to be proud of, one which had tested and challenged the cadets in a harsh environment.

In Zakopane, the group explored a local Polish market and restaurant complete with Polish musicians.

Leaving Zakopane, visits were arranged to Auschwitz, and Auschwitz Birkenau.   At Oswiecim (Auschwitz), our guide painted a harrowing tale of the horror of what life had been like for detainees during this time, which had a profound effect on our group, especially after seeing the archive film footage, and walking through the death camps visiting the various blocks that housed the detainees.

In Krakow, the group visited to the Schindler Factory Museum, and explored the many sights of Krakow old town during a city tour.

For more information about the Combined Cadet Force, visit http://combinedcadetforce.org.uk/