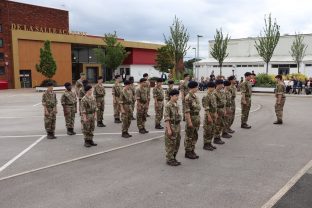 The De La Salle Academy in Liverpool was approved to form a Royal Marine Combined Cadet Force unit under the Government’s Cadet Expansion Programme in 2018 and after 12 months of preparing to parade and recruiting sufficient Cadet Force Adult Volunteers and Cadets, the unit marked its formal opening with a parade and flag raising ceremony.

Parents, School Leaders, Local Dignitaries and Senior Military personnel watched on as the cadets marched onto the school’s front courtyard and formed a parade, before being inspected by Lt Col Matt Churchward, Royal Marines. During the inspection, Lt Col Matt Churchward took the time to speak to each cadet about the things they have learnt and the preparation that they have made for the ceremony.

Lt Col Matt Churchward then addressed the crowd where he was keen to congratulate the school, cadets and parents on meeting this key milestone and how they have now joined the wider Royal Marine family and how the benefit of the cadet expansion programme will help them with raising their aspirations for the future, before sharing the Royal Marine’s ethos and core values with the crowd.

Principal, Mr David Hayes was presented with a plaque denoting the schools admission to the Cadet Expansion Programme, before addressing the crowd to congratulate the cadets of a fantastic performance and describe how the Royal Marine unit is a key part of school life and how it is humbling to see the cadets pride in wearing their uniform.

Parents and guests were then invited to join the cadets for refreshments, before the cadets ran a series of ‘Show and tell’ workshops where they got to show off the skills that they have learnt.

Parents were impressed by the opportunities that are being made available to their children through the Combined Cadet Force Unit and commented on how by being a cadet has really began to make a difference to the cadets attitudes.

Following the workshops, cadets, parents and guests were free to depart after what had been an enjoyable ceremony and it was clear to see the pride on the cadets faces as they left, beaming with the sense of achievement.