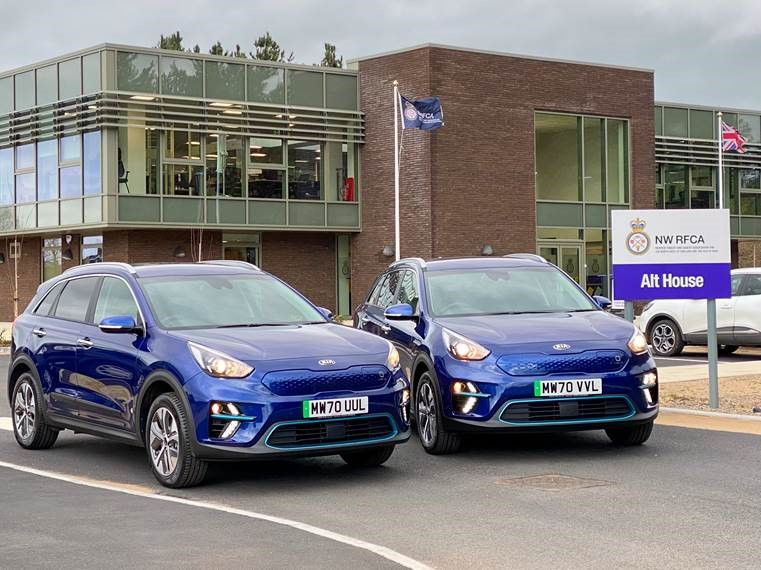 Although electric vehicles are nothing new at Altcar Training Camp (we already operate a fleet of seven fully electric utility vehicles and three plug-in hybrid cars) today marked a new chapter when two, all-electric Kia e-Niros were delivered to the headquarters of the North West Reserve Forces’ and Cadets’ Association (NW RFCA) at their facility in Hightown.

The vehicles, which have a range of around 280 miles, will be used by staff to travel around the North West undertaking tasks in support of the Reserve Forces and uniformed cadet organisations of all tri-services.  The range of the car means that the whole region is in reach – although the majority of journeys undertaken are usually closer to home with the majority of our footprint within 50 miles of Altcar Training Camp.

The acquisition of the vehicles also allows us to further capitalise on the electricity that is generated by the 1.1 megawatt solar farm on a five acre site within Altcar Training Camp.  With future planned developments including the possibility of battery storage to capture electricity generated during the day to then be used to power the site during the night, the Camp could well be entirely self-sufficient in energy terms within the next couple of years.   As a result, these vehicles will seldom be required to be charged by energy from the National Grid.

This is a fantastic example of the opportunities that an innovative approach to working with industry partners can deliver and NW RFCA are leading the way for Defence in our plans and possibilities for the future which we hope to be able to replicate on other sites around the North West.