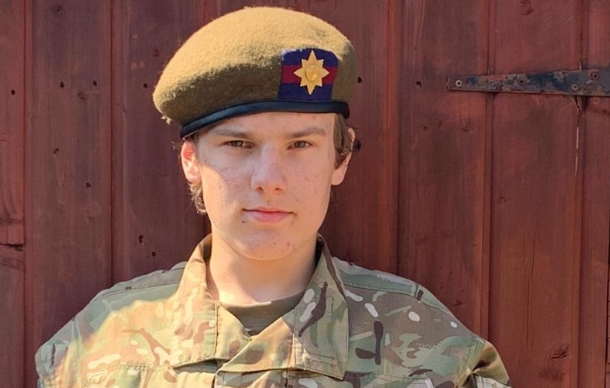 A Cadet from Merseyside ACF has been awarded the Deputy Commander Cadets Coin in recognition of his kind efforts and support to the community during lockdown.

Merseyside ACF Cadet Kyle McBride couldn’t believe his eyes when he opened the post on 1 June and read a letter from the Deputy Commander of Cadets, Brigadier Mark Christie OBE, informing him that he had been awarded the Deputy Commander Cadets Coin for his efforts in the community during lockdown.

Cadet McBride, who is from Crosby Detachment and cap badged Irish Guards, has been very active in supporting his community as well as two other charities during lockdown.

The young cadet, who had no idea that the accolade was on its way to him, has become a local hero because of his kind efforts in co-ordinating the donations and delivery of items such as food, clothes and even electrical items, to those most in need in his community.

With each donation that is sent to the family home, Kyle sorts through every one of them, packages them up and even inserts a hand-written letter which starts with “here is a gift from all of us”. Once the parcels are ready to go Cadet McBride then hands them over to his parents for delivery.

Mrs McBride, Kyle’s mum is especially proud as “he was so quiet until he joined the Army Cadets, even his teachers have commented that his confidence has grown since joining the cadets. I don’t even mind that our living room has now become McBride’s sorting office. We as parents are so proud of him and to receive the Deputy Commander Cadets Coin is truly wonderful. Kyle cares so much about the community that he lives in and helping others in this time of need and uncertainty, making them feel like they haven’t been forgotten, is close to his heart. We are both so proud of the well-rounded and good-natured individual Kyle is growing up to be.”

“ I am very proud of Cadet McBride, since he joined us in November last year he has shown commitment and respect for others in everything that he has been involved in with the Detachment and I am absolutely delighted that his efforts during this time have been recognised with this incredible accolade. ”