You are here: Home > Public News > Air cadets at sea!
◄Back to News 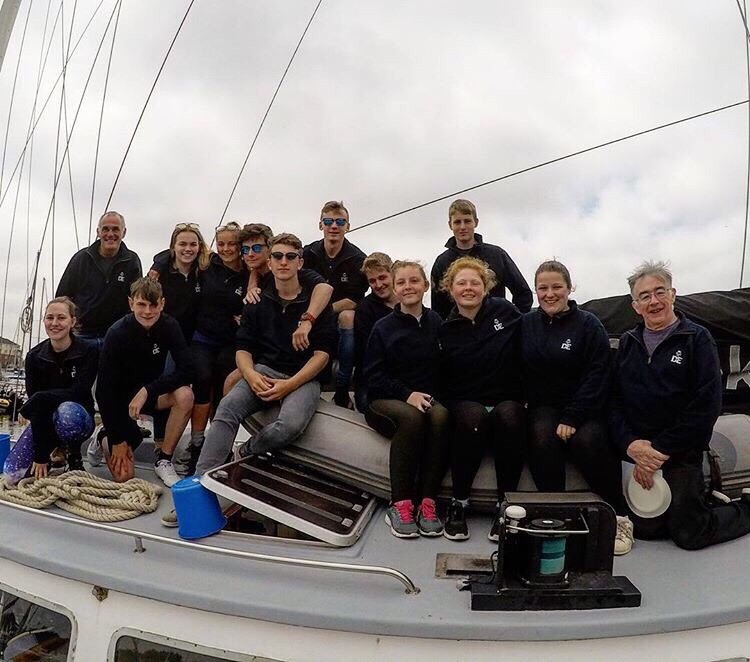 Twelve RAF Air Cadets from Cumbria & Lancashire and Greater Manchester Wings of the Air Training Corps escaped to sea onboard the Ocean Youth Trust (North) JAMES COOK, a 21-metre steel-hulled ketch, at the end of June 2018. During their voyage they were to take responsibility for all aspects of running the vessel.

The 12 Air Cadets and two adult members of staff boarded the JAMES COOK at Royal Quays Marina on the River Tyne, North Shields. After passing under the brass plaque that said, “Enter as strangers, leave as friends”, everyone claimed their berths followed by a comprehensive safety briefing and the issue of safety equipment and waterproofs for the five-day voyage. No time was wasted before preparing for sea under the guidance of the skipper and his crew and then they were off out of the marina to sea. The necessity for good teamwork was immediately apparent. The cadets recovered and stored the fenders used to protect the side of the vessel as they left via the dock whilst others were kept busy tidying away the multitude of ropes into figures of eight and coils. The hard work soon began at sea with the cadets using all their might ‘sweating’ and ‘tailing’ to raise the sails whilst their colleagues were on standby on the ‘purchase’ to finish off. There was no rest whilst sailing though as a keen watch was kept for lobster pots and down in the galley preparations were under way for the first evening feast of honey and mustard chicken. Then the sea fog appeared and chased the cadets into Blyth harbour where Robin the skipper used all his skills to squeeze the JAMES COOK into a tight spot to berth overnight. The hot evening meal was consumed by all and following a debrief of the day the vessel soon fell silent as everyone fell into their berths for a good night’s rest.

The beginning of each day started with everyone sitting down for breakfast followed by the daily brief from the skipper. Then it was ‘happy hour’ when the JAMES COOK got its daily scrub before preparing for sea.

Although there was a persistent morning fog, despite the countrywide glorious weather, the morning hours were filled with learning the various knots, nautical manners and customs, rules of the road, emergency procedures and equipment and meteorology, how to recognize and categorize sea states and the correct way to complete a ships log.

Once at sea again the cadets took turns at the helm under sail circumnavigating the offshore wind turbines and spotting the ‘cardinals’ with their distinctive yellow and black colours, top marks and white lights which indicated the position of the danger that the turbines posed. No rest though as the sails needed attention and of course lunch and evening meals had to be prepared. Some meals were even eaten out of posh stainless-steel dog bowls whilst sat in the cockpit which maximised time at sea before returning to Blyth.

One of the highlights was the man overboard drill with ‘Flo’ the unfortunate sailor buoy falling overboard. The emergency procedures immediately kicked in with a cadet keeping a constant eye on ‘Flo’ and always pointing to her location. The cadets then had to work quickly under the guidance of the skipper and First Mate Jessie whilst the Bosun, Beth, donned her dry suit and was soon hanging over the side to save our dear Flo – twice!

Prior to the voyage finishing there was a chance for a trip up and down the River Tyne to Newcastle berthing near the Millennium Bridge. The cadets all had an opportunity to practice their new skills at the helm under power and identifying the various markers before the grant of shore leave and an opportunity to invade the local shops prior to returning to Royal Quays Marina.

It wasn’t all over though as after breakfast there was an extended ‘happy hour’ prior to a final debrief from the skipper Robin who awarded each cadet with a Royal Yachting Association Competent Crew Certificate and recognition of the completion of their Gold Duke of Edinburgh’s Award residential section.

The cadets said that, “…at the beginning of the week most of (us) didn’t know anyone … we all formed strong bonds…coming away from the trip with lifelong friends. Overall the experience was an amazing opportunity and we would all do it again”.