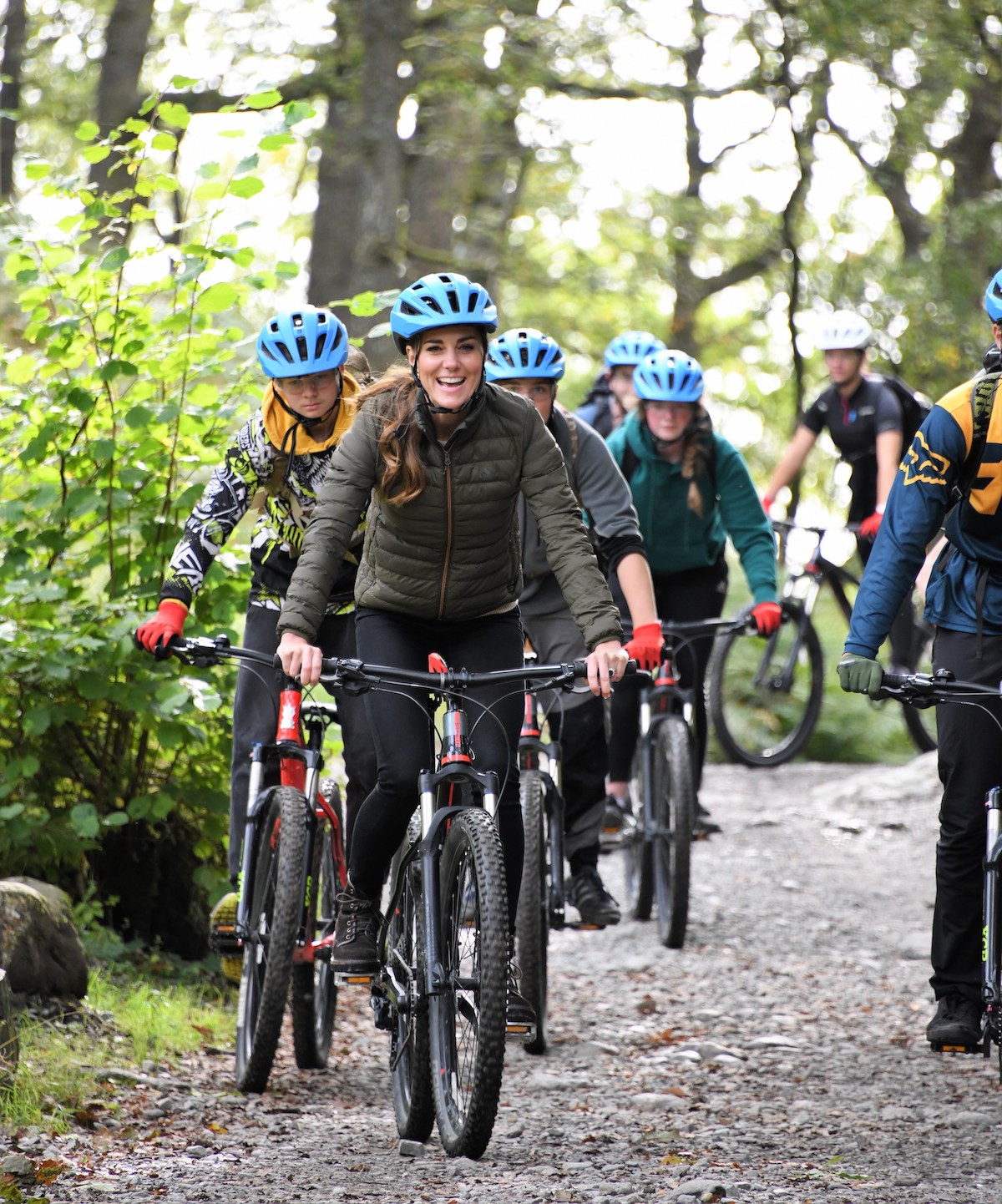 HRH The Duchess of Cambridge joined RAF air cadets yesterday (Sept 21st) as they took part in a number of outdoor activities including mountain biking.

The Duchess, who is Honorary Air Commandant of the Royal Air Force Air Cadets, mastered the cycling tracks in the hills near Windermere laughing with the cadets aged 12 to 19 before chatting with them and their instructors about the benefits of enjoying activities in the great outdoors.

She also joined cadets as they abseiled down the face of a 10-metre cliff in a quarry.

The centre will enable hundreds of cadets to learn from a variety of activities, building their confidence, leadership and helping them achieve their prestigious Duke of Edinburgh Awards.

The Duchess of Cambridge passionately believes that spending time outdoors plays a pivotal role in children and young people’s future health and happiness, building foundations that last over a lifetime by encouraging active exploration and the opportunity to form and strengthen positive.

Squadron Leader Andy Reeve, of the RAF Air Cadet Windermere Adventure Training Centre, said: “HRH took to the mountain biking extremely well.  It was wonderful for the cadets and their adult volunteers to have HRH join them to mark the RAF Air Cadet’s 80th anniversary and the re-opening of the centre.

Cadet Abby Armstrong, 14, from Ripley St Thomas School CCF Lancaster, said: “I found out that we would be meeting her and it was a total shock. I was just like ‘wow’

The Windermere Adventure Training Centre is one of two centres in the UK for the RAF Air Cadets which comprises both the Air Training Corps and the Combined Cadet Force (RAF).  With 60,000 cadets and adult volunteers the organisation has 1,200 squadrons and sections.

Also meeting HRH was former cadet and ex-RAF officer Emma Wolstenholme, who is preparing to complete a 3,000-mile solo row across the Atlantic next January – raising money for the RAF Air Cadets in their 80th anniversary year.

Emma said “it’s been fantastic to meet the Duchess and see the enthusiasm and support that she provides to the air cadets. We talked about the boat, my preparation for the event and my aim to set a new world record and inspire the next generation along the way.”

Commandant of the RAF Air Cadets, Air Commodore Tony Keeling said: “We are honoured to have The Duchess of Cambridge with us today, as our Honorary Air Commandant she is a great supporter of the work of the Royal Air Force Air Cadets and the plethora of opportunities that we offer young people at the 1,200 Air Training Corps and Combined Cadet Force (RAF) units across the UK and overseas.

“We believe in offering Air Cadets the chance to grow in confidence and unlock their potential, getting outside and doing some adventurous training has really positive benefits for mental health and well-being and can help build teamwork and leadership skills.  Today’s activities are a small part of what we offer but a fantastic example of how we help young people develop and achieve.”