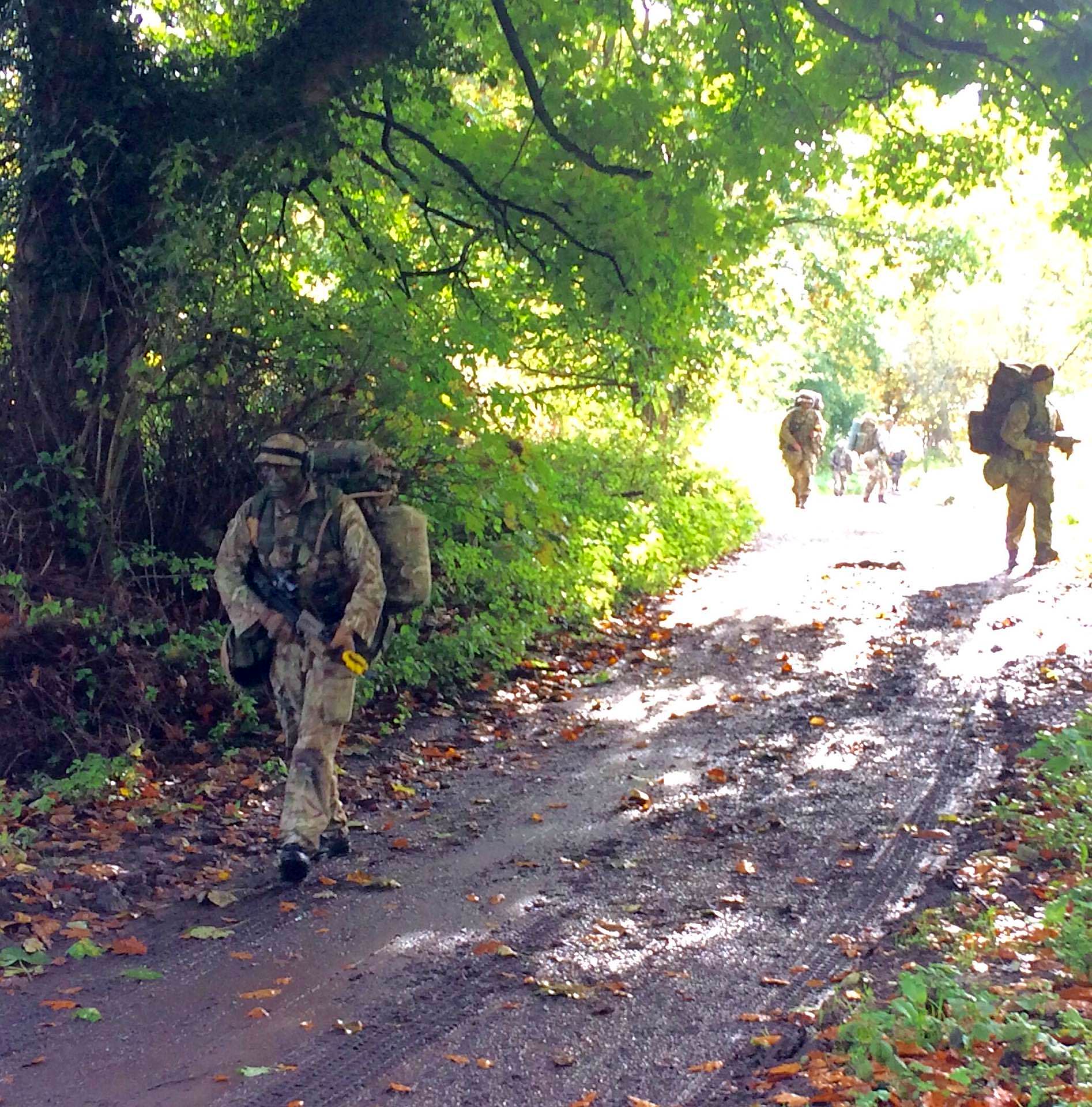 Exercise CAMBRIAN PATROL is a continuous, 48-hour long-range patrol exercise around the Cambrian Mountains of mid-Wales.

The exercise is a World Class event and is open to all three Services with Regular, Reserve, University Service Units and international patrols, It is considered one of the most arduous and prestigious military events, testing candidates’ leadership, field craft, discipline and both mental and physical robustness.

Each patrol is set within the context of a realistic scenario which often involves patrols having to traverse enemy territory, interact with friendly and not so friendly civilians or militia groups. Patrols are de-briefed on everything they encounter on the route during a tactical debrief at the end of their mission.

This year, Reservist Light Infantry the Queen’s Own Yeomanry (QOY) were determined to enter a team and do themselves and the Regiment proud. Lt Arthur Fearnall gave us his account of the exercise:

“The patrol set off at a steady pace and moved through RV1 without any issues. At RV2 however, while the patrol was being escorted through a quarry by the quarry foreman, we came under a chemical mustard gas attack by an unmanned aerial drone. The team reacted quickly to this by moving into cover and donning their respirators. After this the team proceeded to carry out a chemical survey to check the area for any residue threat. When this came back as negative permission was given over the net for respirators to be removed. The team then carried out two-man sniff tests in pairs before removing respirators and moving on. With the sun now beginning to set, the race was on to reach RV3 as quick as possible, so the team began their descent to the valley. At RV3 the team began the gruelling climb up to RV4 located on a hill at 564 meters.

“Then it was time to move to the Final RV in preparation for our close target reconnaissance mission on a suspected enemy location, thought to be located in a forest. With the FRV established and secured the Patrol Commander and his lead scout set off to find and understand as much information as they could about the enemy, including their positions, capabilities and intentions. The pair returned shortly before sunrise and had been successful in their mission, remaining undetected and even getting close enough to the enemy to acquire the registration number of the enemy commander’s vehicle!

“With this done the FRV was collapsed and the patrol moved on to RV5 where a full patrol report was written and passed on to a friendly forces agent. Here the Patrol Commander was also briefed up on his new orders for extraction back to a UN base to the North via a new series of RV points.

“At RV1 the team was required to carry out a river crossing to assist friendly forces whose boat had broken down while moving crucial supplies across the river. After this the team efficiently carried out their wet to dry drills and proceeded on to RV2. Here we came across a medical centre where the local doctor was being threatened at gun point by militia forces demanding medical treatment. The team quickly defused the situation by convincing the militia to give up their weapons. Once this was done they were searched and detained in preparation for the Royal Military Police to take over the situation. When the RMP arrived, the situation was under control and the injured militia were escorted under guard to receive medical treatment while the patrol continued on to RV3.

“Shortly before RV3 the patrol came across a crashed vehicle along the side of the road with two injured passengers inside. It was obvious from the nature of the crash and damaged vehicle that it had been hit by a roadside IED. The team quickly got to work with our mine expert clearing a safe path through the mine field to the car to extract the injured passengers. With this done treatment was given and the casualties were stabilised and extracted through a helicopter landing site further back along the road. At this point local media arrived on the scene requesting an interview. They were dealt with by our media handling expert who was careful not to give away any key information relating to our capabilities or intentions in the area. Shortly after the media had left, a team of Royal Engineers arrived to take over the situation and relieve us so we moved on to RV4.

“RV4 was a disused farm house being occupied by the Royal Artillery as an observation post to assist with calling in artillery fire. However, the site was undermanned so the patrol commander and lead scout were required to assist with target acquisition for artillery fire as intelligence reports suggested the enemy forces were moving armoured fighting vehicles in a direct violation of the Bristol Peace Accord, signed only three months prior. The intelligence proved accurate and when enemy armour did crest over the horizon we were able to react quickly and call in effective and accurate fire control orders to rapidly neutralise the enemy vehicles with rounds of heavy explosive artillery fire.

“After this the patrol moved on to RV5, here we were met by local Special Forces who had intel pertaining to a crashed UAV suspected to be carrying key intel. Our mission was to retrieve the intel before the advancing enemy forces could seize it. To achieve this the patrol moved to a form up point and launched a quick attack on the enemy who were only meters away from the crash site. Delta Fire Team dressed right into a woodblock and began providing cover fire while Charlie Fire Team began bounding in pairs across the field to assault the enemy. The plan was successful and once the enemy were destroyed and the intel was secured the Patrol extracted back with haste to regroup with the special forces. Now the patrol had just one job remaining; take the captured intelligence back to the UN base only four kilometres to the North.

“When we arrived at the UN base we were escorted into a secure building and met by a Military Intelligence Officer and an MI6 operative who we were required to debrief on everything of note on the patrol such as: Enemy locations, intentions and capabilities, key ground and vital terrain, potential avenues of approach, named areas of interest, interactions with local civilians and friendly forces. With the debrief then concluded the patrol was escorted back to a secure location to conduct administration in preparation for likely future operations.”

The team were awarded a Silver Medal which was an incredible achievement.  For those who have never competed, Cambrian Patrol is hard, very hard, both physically and mentally. Teams often cover 60km in the 48 hours, tactically, over some of the most demanding terrain the British Isles has to offer (while carrying 40kg of fighting weight).

Of the 31 Reservist teams who crossed the start line, 71% failed to cross the finish line this year.