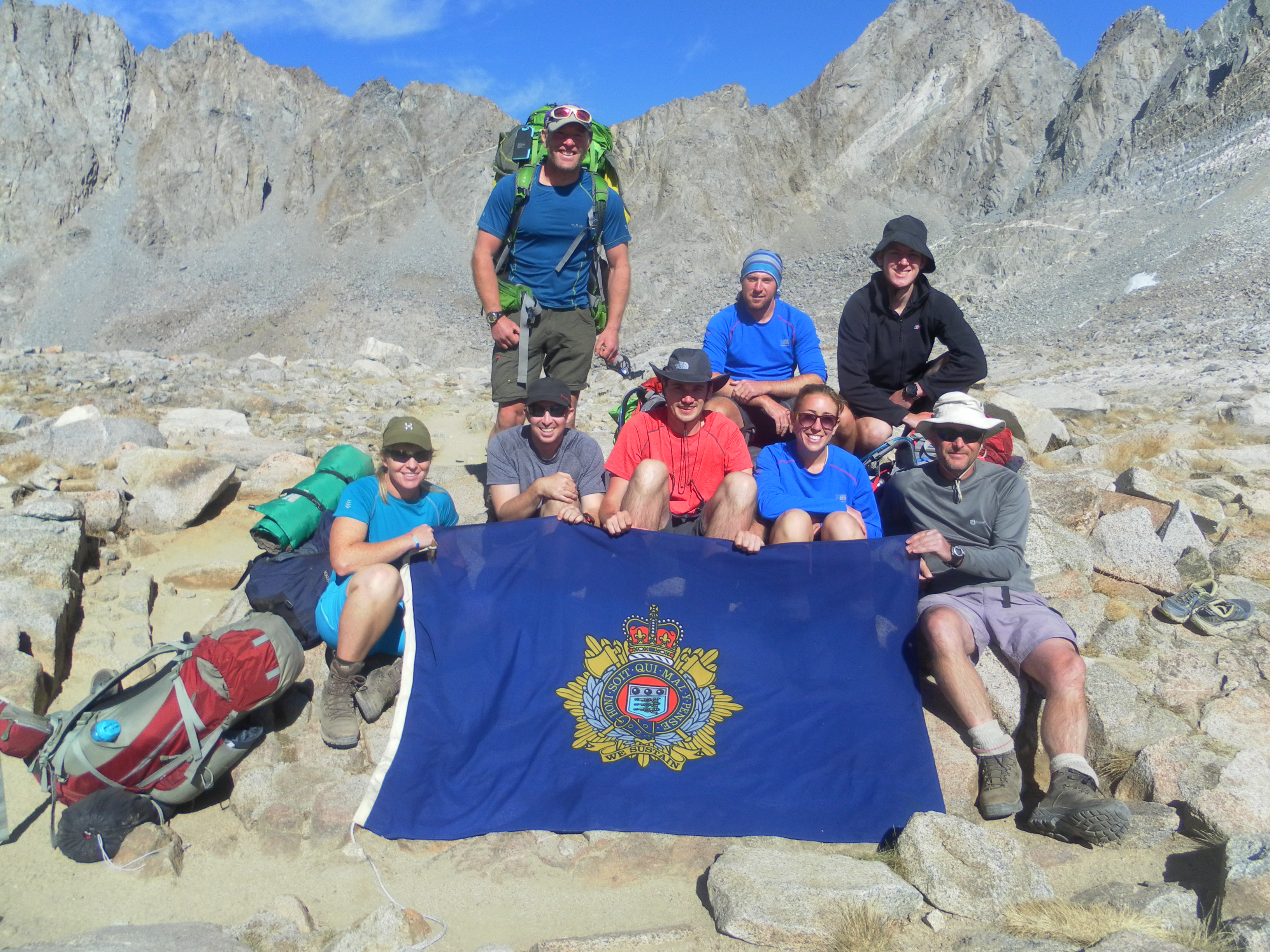 Earlier this year eight Army Reservists from the North West of England, part of 156 Regt RLC, trekked the classic ‘Evolution Loop’ part of the John Muir Trail in the Sierra Nevada, California. The loop sits on a high plateau mostly above 10,000ft at an altitude twice the height of Ben Nevis, but also crosses three passes at 12,000 feet; the Eiger is only 1,000 feet higher!  This necessitated two acclimatisation days before starting the loop.  Statistics were a grand total of 77 miles achieved in eight days over a vertical height gain of 14,000ft.  Expedition members carried rucksacks weighing 20kg and were self-sufficient throughout the trek. 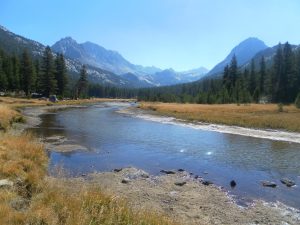 The team quickly got used to US style camp grounds that only provided toilets – no sinks or showers. This made the transition to back country camping almost unnoticeable with the exception of the obligatory shovel (trowel) recce for daily ablutions.  Team members felt the effects of altitude, amplified by heavy rucksacks, and had to adopt a much slower and deliberate walking pace.  Throughout the trek we remained vigilant and slightly hopeful of seeing black bears (especially as we were carrying rather cumbersome ‘bear barrels’ to store our food, trash and toiletries each night) but none were spotted.  The introduction of these bear barrels has almost eradicated any bear encounters in the parks, as bears have clearly stopped associating humans with food.

During the trek we came across numerous groups of walkers, always fascinated to hear about the British Army Reserve. Our group of Reservists included a BT engineer, a driving instructor, a gym manager, a Nuclear plant engineer, a recruiter, a student and an outdoors instructor.

A number of issues with our fuel stoves resulted in most cooking been done on open fires, almost a blessing in disguise as we developed a new camp routine: the daily chores of firewood collection, fire-lighting skills, clothes drying (and/or scorching) and cooking on an open fire. Some nights we were joined in our routine at the camp fire by John Muir Trail through hikers, regaling us with their stories and grateful for the convivial setting of a camp fire.  Most hardened hikers appeared to cook on a fuel stove and minutes later hibernated into their tents, so our Ray Mears set up attracted much interest and inter-continental banter by starlight and Petzl torch. 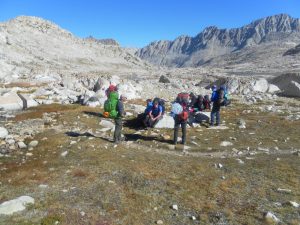 Evolution Basin all above 11,000 feet

During the trek we stayed a number of nights above 10,000 feet with sub-zero temperatures resulting in freezing water in our bottles and frosty tent outers. The stark reality of the dangers of living at this altitude were reinforced one morning when we met a lone female hiker in her late sixties who, whilst erecting her tent the night before in gusty conditions, had almost seen her tent blown into the lake.  This experience had clearly shaken her and the thought of surviving a night out under the stars at over 10,000 feet had scarred her for life.

Due to the very dry and rocky conditions underfoot a common ailment was sore feet and blisters, treated in the high mountain lakes and streams. Staff Godridge even braved an Acapulco style dive in from the rocks; but the look on his face convinced most of us that whilst the beautiful translucent green of the lake was superb for photography it was mind numbingly cold for a swim.  The highlight of the loop was the stunning views in the Evolution Meadow section of the trail, enhanced further by the autumnal colours.  Each team member had had to overcome some mental and/or physical battles to achieve their goal.  It was a truly character building experience for some and a very steep learning curve for those new to a long distance, high altitude trek.

Our return journey to the UK took in the sights of Death Valley, the Hoover Dam, Lake Mead, Valley of Fire, the Grand Canyon and not forgetting Las Vegas, our departure airport. On our return to Manchester it seemed incredible that we had achieved so much in such a short period of just 17 days.   None of this would have been possible without the generous Public and Non-Public Grants which we were most grateful for.

For more information about 156 Regt RLC and how you can get involved, visit https://www.army.mod.uk/logistic/regiments/30785.aspx