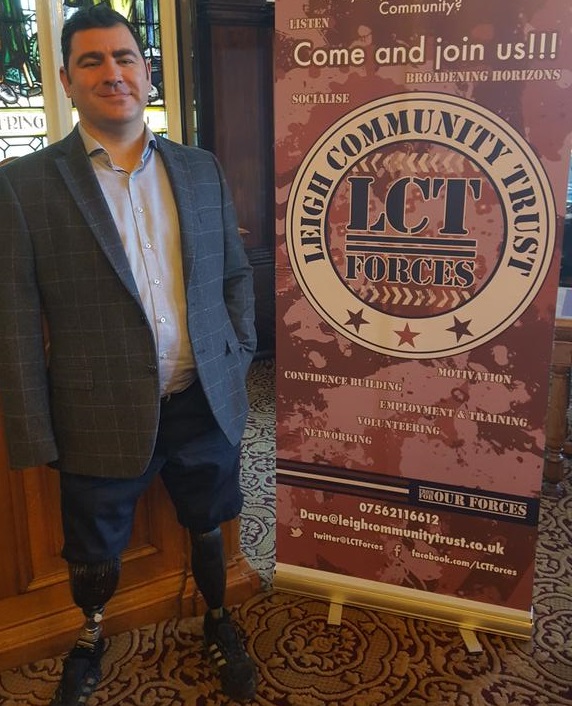 Services helping the ex-forces community in Wigan Borough have been armed with new contacts to make sure veterans are provided with the right support.

Leigh Community Trust (LCT) organised an event, ‘Networking 4 Forces’, at Leigh Town Hall in November, which saw people from Wigan Council, Royal British Legion, Inspiring Healthy Lifestyles, NHS and many more come together to discuss the work they do in Wigan and Leigh to help local veterans.

Fellow veteran, keynote speaker and LCT colleague, Andy Reid, gave an inspirational talk, which urged services to think differently about how they deliver their support.

He explained that services need to think about how they communicate with the veteran community to ensure their needs and wants are clear, instead of being assumptive about what a person wants to do when they leave the forces, based on their previous experience.

He said: “There’s a large ex-forces community in Wigan Borough and there are many services that provide a lot of help, but it’s important that they are aware of each other and the work they’re doing in order for local veterans to reap the full benefits.

“Even though each organisation is great separately, we’re stronger working together, so Networking 4 Forces was about instigating conversations and encouraging new connections in order for us to easily signpost the ex-forces community to the relevant support network.”

The speed-dating style event gave each service three minutes to talk to one another, before moving around the room to introduce themselves and speak with a different organisation.

Councillor Paul Kenny, lead member for armed forces in Wigan Borough said: “It’s so important that we share our work with our partners in order to inspire new ideas and working relationships that can ultimately lead to better service provision for the veterans in Wigan and Leigh.

“Events like this are just the beginning, it’s how those new connections stem into something bigger afterwards that is important and I applaud Leigh Community Trust on their successful efforts to bring together these services to learn more about one another.”

Wigan Council’s portfolio holder for adult social care, Councillor Keith Cunliffe opened the event and explained that services should to work together to complement each other.

Services that attended the networking event were surprised at how much work was being done by other organisations that they could link in with.

They were confident that the new connections made would lead to better service provision for veterans, so they can be easily signposted to the appropriate services to help individual needs.

There will be another ‘Networking 4 Forces’ event for veterans across the borough to drop in and find out more about the services available to them. The event will take place at Leigh Sports Village in February 2017.

For more information about armed forces work in the borough, follow Wigan Council and Leigh Community Trust on Facebook.