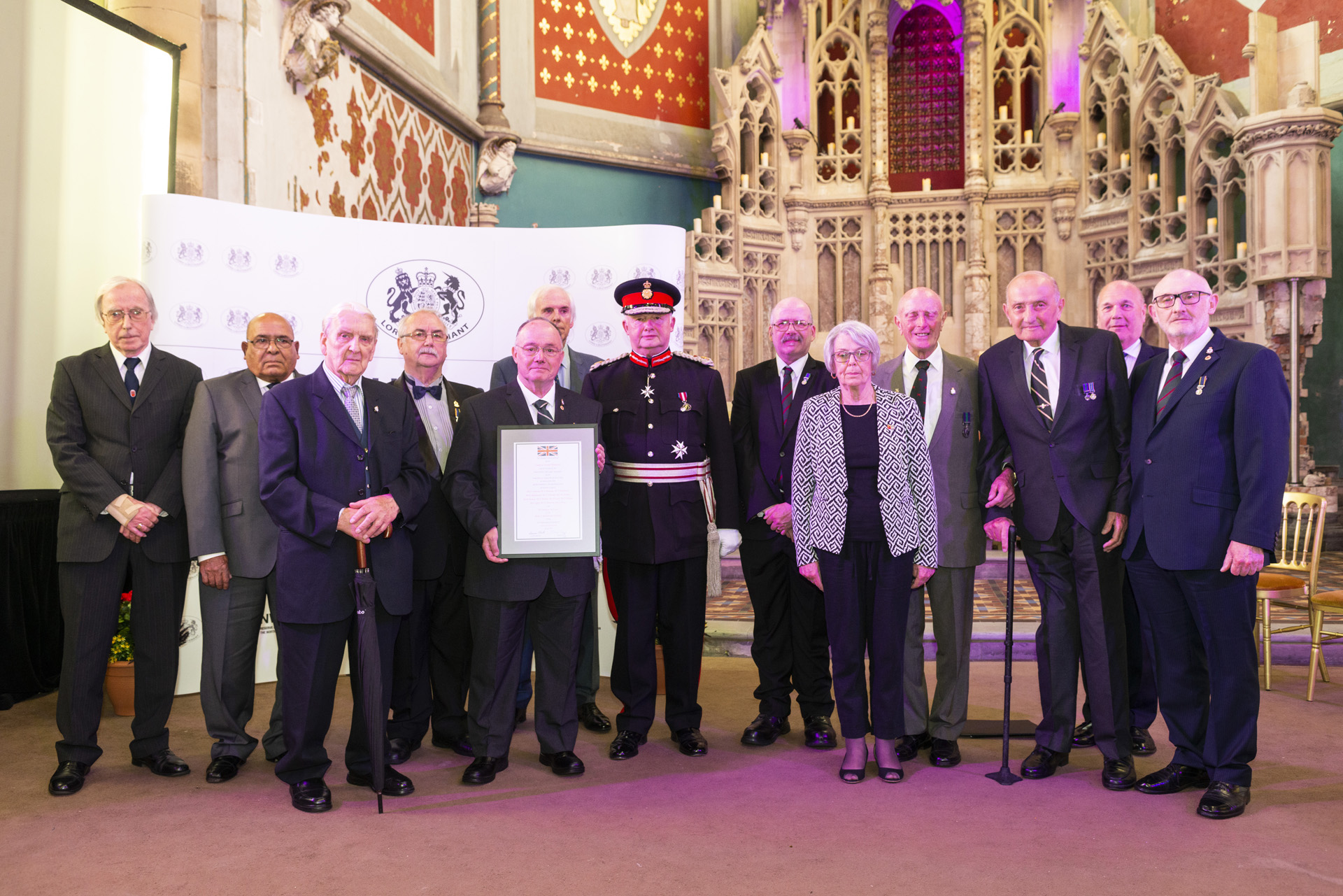 Thirteen members of the Manchester Regiment Old Comrades Association were honoured last week at Gorton Monastery by Her Majesty’s Lord-Lieutenant for Greater Manchester for their exceptional dedication to the ‘Turning of the leaves’ ceremony.

During the ‘Turning of the leaves’ ceremony held at Manchester Cathedral, a page is turned in the Book of Remembrance for the Duke of Lancaster’s Regiment, each page contains the name of servicemen who have died in service. The ceremony has taken place every fortnight since May 1937. The only known time the ceremony was suspended was during World War Two which means the service has taken place over 1,600 times.

The simple, dignified ceremony is overseen by a cathedral verger, during which seven veterans turn the leaves of the seven books and the collects of the Manchester, Kings and Duke of Lancaster’s regiments are read. Memorials are also read in the memory of recently deceased veterans. The verger then gives short prayers for peace, Queen and commonwealth.

The average age of the people who carry out this voluntary task is 75 years. The team leader, Peter Ashworth, is 85 years old, whilst the oldest is 89 years old Harold Jackson who travels from his home in Liverpool by public transport, a round trip of 65 miles. Peter has been doing weekly journey regularly since 1988.

The old comrades are totally dedicated to the continuation of this act of remembrance and turn up fortnightly regardless of rain, snow, hail or ice. Some of them are now a little unsteady on parade but are nonetheless determined to be there despite having to travel considerable distances.

The presentations were made by Mr Warren Smith KStJ JP DLitt LLD, Her Majesty’s Lord-Lieutenant for Greater Manchester. During the ceremony Mr Warren Smith commented: “I truly thank all of you for your dedication, it is right that they are recognised for their meritorious voluntary service.”

The annual awards are organised in each County in the region by the Reserve Forces’ and Cadets’ Association for the North West of England and the Isle of Man (NW RFCA). NW RFCA Chief Executive, Colonel Mark Underhill OBE DL, said: “As the organisation which supports and promotes the Reserve Forces and Cadets in the region, these awards ceremonies truly are the highlight of our year.

“The Cadet organisations, both in communities and in schools, offer young people unparalleled opportunities, experiences, skills and qualifications. The achievements of the cadets who have received awards this evening truly are outstanding, and they are highly deserving of the recognition of Her Majesty’s Lord-Lieutenant Award.

“None of these opportunities would be possible however without the dedication and commitment of the Cadet Force Adult Volunteers who give freely of their time and skills for the benefit of young people. Tonight gives us an opportunity to celebrate their exceptional volunteer service, and to thank them.”