You are here: Home > Public News > Deputy Chief Executive hands over the reins
◄Back to News

This month NW RFCA bids farewell to Lt Col Ian Sawers, who retires after 13 years as Deputy Chief Executive. He is succeeded by Col Alex Barnes, who takes up his new appointment this month. 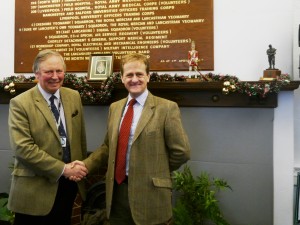 Alex was commissioned from RMA Sandhurst in 1984 and posted to 162 (Movement Control) Regt RCT where in 1991, as Acting Major, he was appointed OC 282 (MC) Sqn with an attachment to HQ ARRC in Rheindahlen, Germany. In 2000 he was promoted Lieutenant Colonel and appointed CO 168 Pioneer Regt RLC, a recently formed Territorial Army (TA) regiment.

Promoted Colonel in 2005, the appointment of Command of 1 Postal and Courier Group was delayed due to an eight month tour in Iraq (February to Sep 2005) embedded with the US Forces in Baghdad. In 2006, Col Barnes was appointed Commander 1 and 3 Log Sp Group, RLC. In Jan 2009, he was posted to the Army Officer Selection Board as a Vice President. In April 2011 he also took on the role of Col TA, AOSB. In February 2013, he was appointed Assistant Commander, 101 Logistic Brigade, a Reactive Force Brigade with 18 Major Units within the 3rd Division. In this appointment he developed a key directive to enable the Reserve Units to provide a deployable component, within capability, at R5.

In his civilian career, Alex has most recently held the post of project manager in Service Development with the South Central Ambulance Service. Qualified in project management and programme management, his previous civilian job was Assistant Director; Head of Private Patients and overseas visitors with the Oxford University Hospitals NHS Trust. Prior to this, he had extensive experience of planning at both a corporate and at divisional levels.

Married to Fiona, a nurse manager, Alex has two girls; the eldest a vet and graduate of Liverpool University and now based in Altrincham, and the youngest, a recent graduate of Goldsmith University of London, and currently a Personal Assistant. Alex’s interests outside work include running, medieval and ancient history, competitive sailing, scuba diving and ski-ing. He is also Chairman of The Royal Pioneer Corps Association, a member of the Royal Logistic Corps Benevolence, Regimental Affairs and Association committees, and a County President for St John Ambulance.

Lt Col Ian Sawers was appointed Deputy Chief Executive NW RFCA in 2002 after a career in the Army which included appointments as Protocol Staff Officer at HQ Berlin (British Sector); OC Regimental Signal Officers Wing at the School of Infantry; Principal Land Warfare Staff Officer at HQ Baltic Approaches in Denmark – a NATO appointment; CO 7th (Durham) Battalion the Light Infantry; and, Chief G2/G3 at HQ Wales and Western District. His voluntary duties include being the RIFLES City Colonel for Merseyside, the Shropshire County Coordinator for Help for Heroes (he is one of the founding volunteers) and a member of the League of Friends for Wem Detachment, Shropshire ACF. All at NW RFCA wish him the very best for the future.