You are here: Home > Public News > CWO Dutton from 146 Northwich Squadron selected as best Female Cadet in the Air Training Corps for 2020
◄Back to News 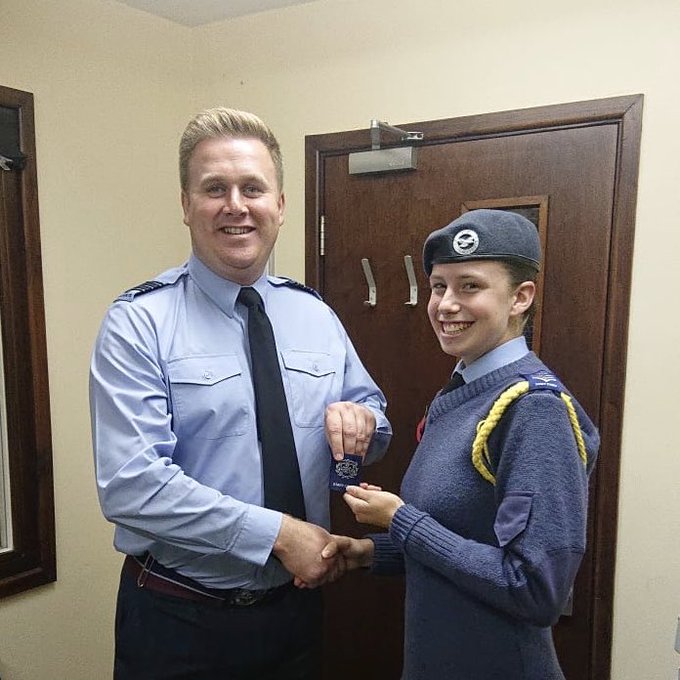 Royal Air Force Air Cadets have announced the results of their annual National Awards competition to select the best of the 40,000 Air Cadets from across the country and overseas, with nominees being reviewed and interviewed by a panel of judges, among them being Air Commodore Dawn McCafferty CBE, who has been Commandant RAF Air Cadets since 2012.

Among those interviewed by the panel was Cadet Warrant Officer Samantha Dutton of 146 (Northwich) Squadron. CWO Dutton has been an RAF Air Cadet since joining in May 2015 and since then been involved in all areas of training available to young people in the organisation including Flying, Adventure Training, Leadership, Sports, the Duke of Edinburgh Award Scheme and in events aimed at contributing to the local community. CWO Dutton is well known within Merseyside Wing Air Cadets for her Sporting, First Aid, Arms Drill and Musical talents. She is well respected, always friendly, ever helpful, willing to assist other Cadets in developing further as well as continuing to parade weekly in Northwich despite now studying at Liverpool University since September 2019. Her commitment and willingness to provide support across the Wing meant that there was no hesitation in recommending that she be considered for the highly prominent award of best Female Cadet in the Air Training Corps.

Following a virtual Dragons’ Den style of interviews as opposed to the usual selection process taking place at College Hall at RAF College Cranwell in Lincolnshire, it was announced that Cadet Warrant Officer Dutton had been selected and is to be awarded the ATC 75 Sword as the best Female Cadet in the Air Training Corps for 2020, with the formal presentation to take place following the end of the current lockdown. Air Commodore McCafferty said of those who were nominated that “they all gave so much back to the RAF Air Cadets, mentoring and instructing younger Cadets and supporting our hard-working adult volunteers. They are the best of British youth and I could not be prouder of them.”

On behalf of Merseyside Wing, Wing Commander Joe O’Riley stated that “It was fantastic to be informed that CWO Dutton is this years ATC 75 Sword Winner. This award could not have gone to a more exemplary and deserving Cadet. She epitomises everything we expect our Cadets to be and is a great role model for her fellow Cadets, the Staff and the organisation as a whole. I am so proud of what she has achieved and the fact that she has made Merseyside Wing history by winning this prestigious award.”