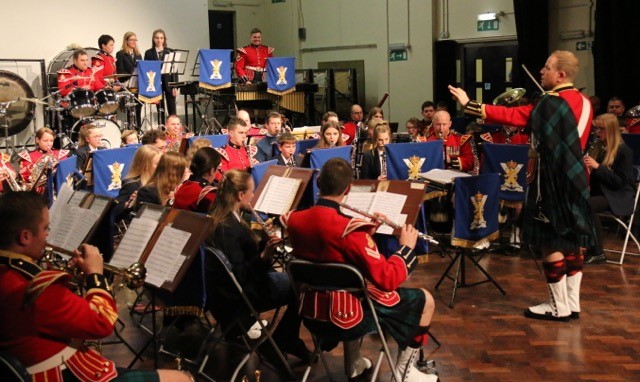 Professional Army musicians from the Band of the Royal Regiment of Scotland crossed the border to coach pupils from William Howard School, Brampton, in a series of workshops before performing together in a concert at the school on Wednesday evening.

The concert was supported by Army Cadets from Brampton Detachment Cumbria Army Cadets, most of whom are also pupils at the school. They collected funds for the Poppy Appeal at the end of the evening.

The Lord-Lieutenant of Cumbria, Mrs Claire Hensman, and her husband, Peter, attended the concert, as well as the Commandant of Cumbria Army Cadets, Colonel Anthony Steven.

The Band, conducted by Major David Barringer, played several renditions, including ‘Danny Boy’ and some of the score from ‘Les Miserables’.  The concert was dedicated to Alan Branston, the school’s band master, who sadly passed away recently.  Alan had spent 23 years in the Grenadier Guards before dedicating his expertise to the pupils of William Howard School.

The day had been organised by Band member, Lance Corporal Simon Newing who was a former pupil of the school before joining the Army.

Major David Barringer said: “Simon is behind all of this, and what an incredible experience it has been for everyone involved.”

Col Steven addressed the school musicians in order to promote the creation of a new Cumbria ACF military band, which will be based at Carlisle Castle. He said: “I very much hope that they will all now want to join Cumbria ACF’s new marching military band and play at parades and concerts locally, regionally and even at national events.”

For more information about Cumbria Army Cadets and how you can get involved, as a cadet or as a Cadet Force Adult Volunteer, visit armycadets.com/county/cumbria-acf/