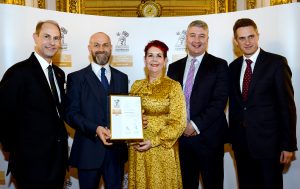 In November 2018, The Sovini Group received its Gold Award for outstanding support of the Armed Forces community.

The Group was previously awarded Silver in 2017 and Bronze in 2016.

The property management and development group has a long standing commitment to the Armed
Forces community. They work in close partnership with local organisations such as the Army Reserve
unit 156 Regiment RLC, local veteran charities and Brunswick Youth and Community Centre.
The Sovini Group’s work with Liverpool Veterans HQ and Veterans in Sefton has led to over 30 local
veterans being rehomed and in many cases saved from homelessness. As part of the rehoming
process, the veterans are offered goods to help them furnish their new home and there is ongoing tenancy support for more vulnerable tenants.

The company also offers a volunteer placement programme, which supports veterans with their
transition from the Armed Forces into employment within civilian life. Some of those who took part in
the programme have gone on to get jobs within the Group, such as at Sovini Trade Supplies in Aintree.

The Sovini Group also employ a number of Reservists and support them through company initiatives
such as an additional 10 days leave for training and unlimited unpaid leave if they are mobilised.

Dr Roy Williams, CEO of The Sovini Group said: It’s an honour to achieve the Gold Award. By
adopting the Armed Forces Covenant, we help to make sure the people who make huge sacrifices on
our behalf receive the recognition and support they deserve in the workplace and the wider community.